well..... sadly im losing edits in Melodyne if I BIP my vocal (where it then mutes the regions of the original track) and close the session and reopen it.

it keeps the edits as long as im in the same session and don't close it ....

at least it seems to be keeping edits as longs as the ara track is active/unmuted regions) upon saving.

so... much... potential with ara and logic can't seem to get it right.

Just started testing 10.4.5....on my 2015 MacBook pro...It really is blazingly fast on a large project to pic with hundreds of tempo changes, 74 tracks, and lots of Flex pitched audio!! The other thing is that you can now have multiple mixing boards stacked vertically on one screen and they will hold their respective (different) horizontal scroll positions, so you can see all your tracks etc at once, lock the screenset and the configuration is saved and recalls properly..at Last!! Nice 1st impression so far.
Top

Apple really seems interested in the creative pro audience again. That can only be good for all of us. Assuming the price doesn’t go pro...
2015 iMac, i7-6770k, 32GB, 3TB
Top

Didn't it do so already?

Can anyone resize the performance window? I can't seem figure out why but it doesn't work.
Top

Sascha Franck wrote:
Didn't it do so already?

seems like this is about logic (not, say, the new mac pros)///

Really solid update! I'm grateful for all of the enhancements and bug fixes

Fwiw, no issues so far. Out of fun I created a medium sized project (a bunch of sampler instances, EXS and Kontakt mixed) with no regions on any tracks (hence template style) in 4.4 and closed Logic. Starting 4.4 with that project takes 45 seconds, with 4.5 it's 8 seconds.
Obviously, once you actually use all those tracks, the returns are diminishing, but it's a pretty damn impressive thing in case you're using large templates (or rather avoided doing so until now).
Might be a good idea to either hide large portions of such a template or put things into folders/stacks, because once you click onto a track accidentally the used instrument will obviously be loaded.

I may not exactly profit from this feature too much myself - but I can clearly see how people into things such as creating larger orchestral scores will just love it. You could really just load everything into your template without any waiting time.

rico wrote:
Can anyone resize the performance window? I can't seem figure out why but it doesn't work.

Well so much for my axiom pro 61 workaround (manually copying axiompro bundle) finally stopped working with this version. Such is the price of progress. On the plus side, no longer have to be paranoid about updating os or logic anymore.

rico wrote:
Can anyone resize the performance window? I can't seem figure out why but it doesn't work.

I can't resize it either.

davidvilla wrote:
I can't resize it either.

are you talking about the main window?? i can resize it here... 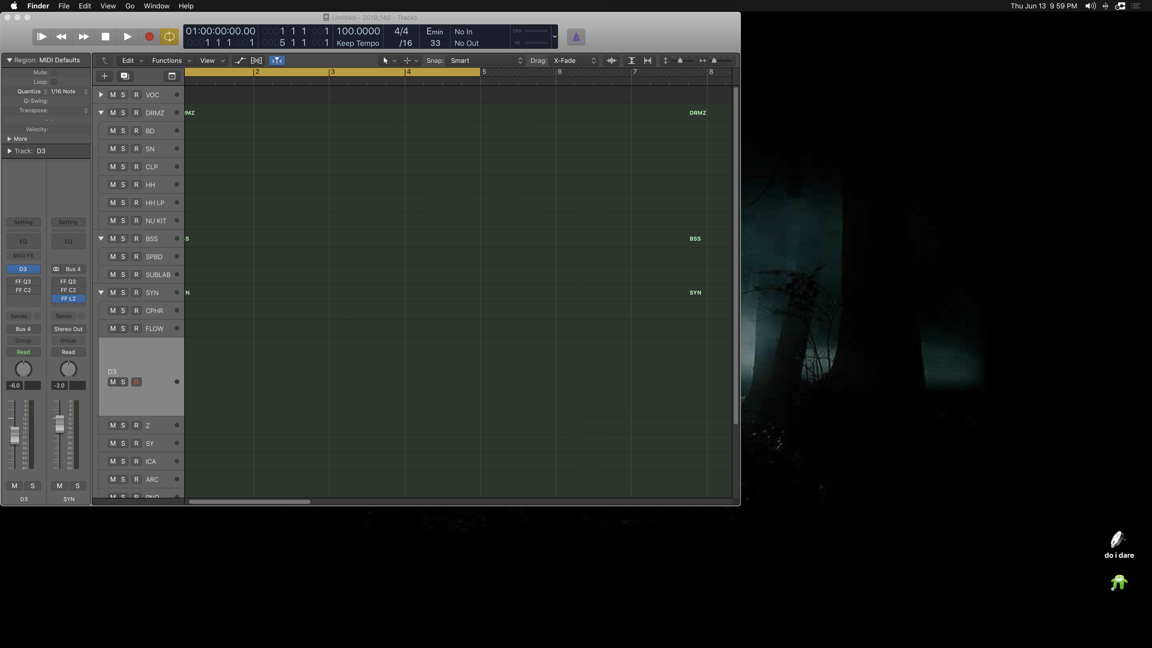 It's not that they (Apple) don't know about it. It's been brought to their attention many times. As it stands right now, it's a good thing Celemony is being patient with getting Apple up to speed on it. I'm sure there are many of us that would really love to see it happen tomorrow, I know I would. However we have no idea how complicated it might be to implement from a code-base standpoint.

chucknkd wrote:
so... much... potential with ara and logic can't seem to get it right.

fisherking wrote:
are you talking about the main window?? i can resize it here...

Man this a killer update, Logic is crushing it! On top of all the new headline features the transpose region shortcut is awesome. A real small gripe but huge for me, the white flashing alert doesn’t go off anymore when scrolling up and down tracks - it used to flash when you hit the bottom or top. I detest the white flash still but this made it way better.
LPX 10.4.5 • OS X 10.14.5 • Trashcan Mac Pro 6 Core 3.5ghz 32GB ram
Top

I just started testing LPX.4.5.
Can't say anything about performance yet, but saw this raw font at the bottom of the Channel Strips for instance.
Is this a non-retina issue... or due to my system... or due to myself?

dmuckala wrote:
THIS. Is the update/fix I've been waiting for literally YEARS for. We finally have a proper enable/disable tracks feature. Like chucknkd said, when Logic Pro X was first released, the on/off button that I had come to rely upon in Logic 9 was basically rendered useless. But now once again you can bip an instrument track, option click on/off button and hide the old track and it won't hog resources on subsequent reloads of the project. Thankyou Apple for giving us back this pro feature.

Now if they'd just give us BLACK as a color again. (yes, I know there is a workaround)